Monday morning I woke up early, like 5 am – the house had sugar everywhere it was over whelming – I had some peanut m&m’s and then decided to make a greens shake I had a glass of it before realising I’m not even hungry.
I felt like a zombie and decided to go back to bed.
After another hour I woke up this time just lying in bed. I had nothing to work for? It was done, my goal was met, the deadline had past and the huge build up had only lead to another day where everything was back to normal? I was confused, overwhelmed, sad, happy – the whole process was so emotionally draining the thought of it being all over was too much and I started tearing up.
‘What do I do now?’
I felt lost. Matt came home from work and asked the question no one should ask when they can tell someone is upset…. ‘Are you okay?’ the sob turned into a full cry and the worst part was I couldn’t even explain to him why I was crying… poor Matt’s probably thinking I’m engaged to a nut job! I settled down and went to work – I felt so much better after work – I always do (again nut job!)
I was told about ‘post comp blues’ and at the time I was like as if I’m going to stuff my face full of everything and anything and love it once this whole thing is over!!!
It couldn’t be further from the truth – although during comp prep it was hard I may have felt tired at time it was also rewarding and put me into a routine. I now miss training already and surprisingly miss eating chicken and broccoli!!!
So do it again?
There is so many pro’s and con’s to the situation that make it not that black and white.
Pro is it gives me a goal and deadline to work towards – I now have more knowledge about the process and would obviously take stage looking even better. I love the fact that you work so hard and get to show off what you’ve worked hard for – I’m a competitive person so I now have that hunger to win.
Cons it is too consuming, I couldn’t have a normal social life, I was a shitty, temperamental person and I rather put my energy into my clients rather then my self. It was also an expensive process racking up over 2.5K over the 15 weeks!
In saying that I was to take this time to official thank my fiancé – words can not even describe how supportive he was the WHOLE time from the start where he told me it wasn’t going to be easy but at the same time telling me I’m too head strong and stubborn so I’ll get it done… right to the end where I was almost was over it and wanted to leave before my last stage walk. Mate, at times I was short, rude and down right nasty – he stood by me not once did he complain, want me to stop or sabotage me. I’m sure I snapped at him for looking at me, touching me and even eating in front of me. He listened to my worries and made me realised about 90% of the were made up scenarios in my head and wiped away my tears in my break downs – I’m so lucky to have you and even luckier to be getting married to you – you are actually the best human ever and I don’t tell you that enough!!!
So now what?
You’d think going back to normal eating would be a breeze – it has actually been a massive challenge the last 3 days I have had heartburn, headaches, body aches and have been bloated as hell all because I’m trying to eat what I use to pre-comp – my stomach has shrunk I can’t eat as much as I use to! I want to but I literally can’t! So I’m back to smaller meals and will increase portion sizes over time. Have I enjoyed my post comp feeds? In short not at all because they gave me the above symptoms I’ve felt like crap! I don’t even want to look at any sugar filled snack or will probably vomit!
How do I plan on filling my void?
With the comp over I want to put what I’ve learnt in both food and training into a 12 week guide – this is my next goal. This 12-week guide is not for comp prep it will be for girls who are already lean to take it to the next level of shredded. So I’ll by trailing the program on my self first before I realise it to others as I need to find healthier and more maintainable and realistic ways of keeping results earned, I’d love to hear if this is something you would be interested in as I feel many girls I train are not over weight they struggle to get that extra leanness about them and plateau easily… Inbox me or simply comment to let me know!
Stay Strong & Stretch,
Tel X 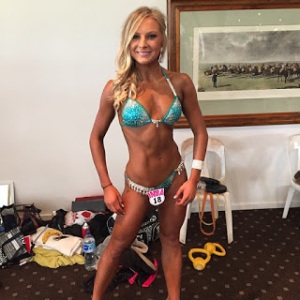 View all posts by talkingwithtel